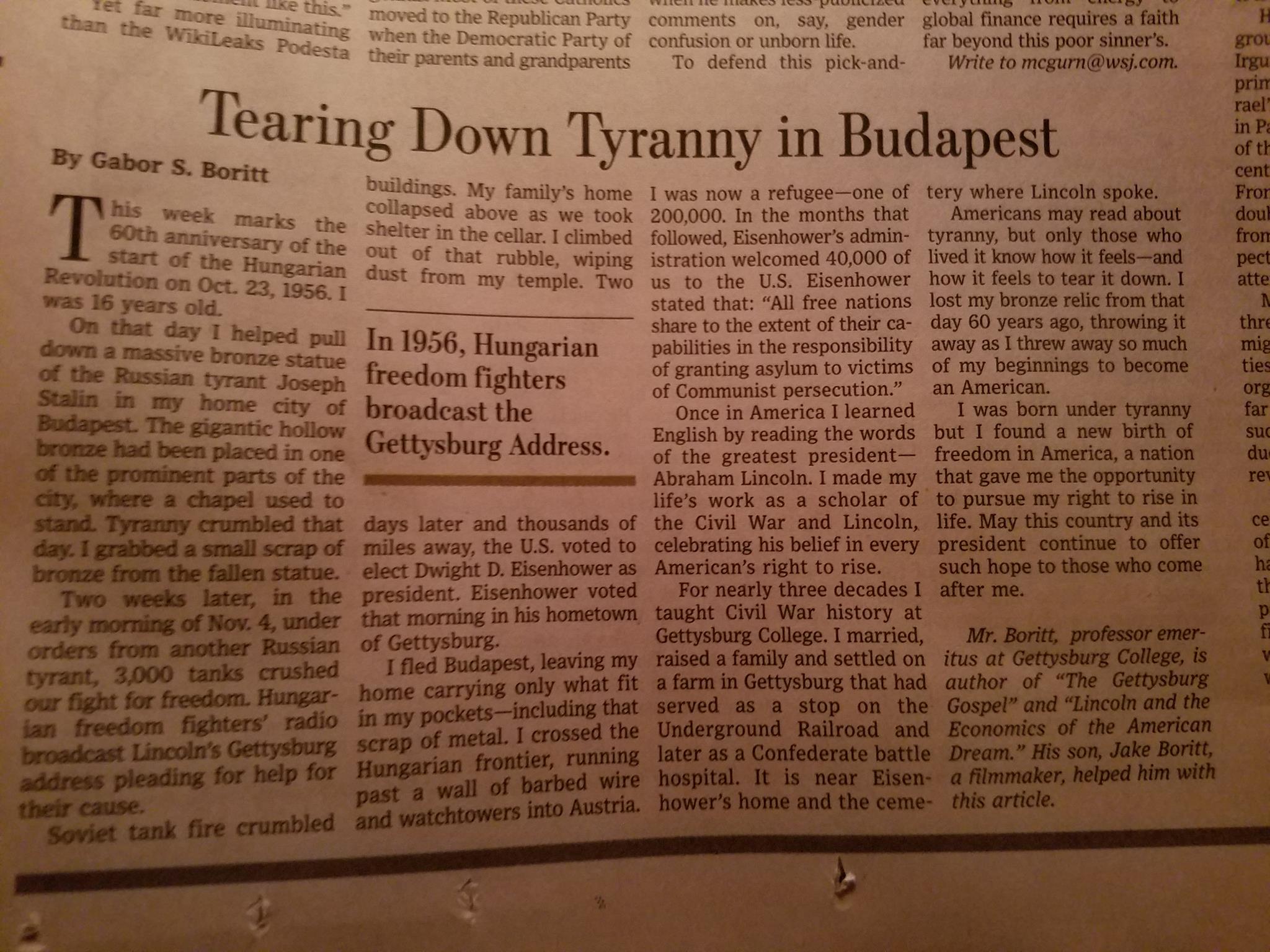 On that day I helped pull down a massive bronze statue of the Russian tyrant Joseph Stalin in my home city of Budapest. The gigantic hollow bronze had been placed in one of the prominent parts of the city, where a chapel used to stand. Tyranny crumbled that day. I grabbed a small scrap of bronze from the fallen statue.

Two weeks later, in the early morning of Nov. 4, under orders from another Russian tyrant, 3,000 tanks crushed our fight for freedom. Hungarian freedom fighters’ radio broadcast Lincoln’s Gettysburg address pleading for help for their cause.

Soviet tank fire crumbled buildings. My family’s home collapsed above as we took shelter in the cellar. I climbed out of that rubble, wiping dust from my temple. Two days later and thousands of miles away, the U.S. voted to elect Dwight D. Eisenhower as president. Eisenhower voted that morning in his hometown of Gettysburg.

I fled Budapest, leaving my home carrying only what fit in my pockets—including that scrap of metal. I crossed the Hungarian frontier, running past a wall of barbed wire and watchtowers into Austria. I was now a refugee—one of 200,000. In the months that followed, Eisenhower’s administration welcomed 40,000 of us to the U.S. Eisenhower stated that: “All free nations share to the extent of their capabilities in the responsibility of granting asylum to victims of Communist persecution.”

Once in America I learned English by reading the words of the greatest president— Abraham Lincoln. I made my life’s work as a scholar of the Civil War and Lincoln, celebrating his belief in every American’s right to rise.

For nearly three decades I taught Civil War history at Gettysburg College. I married, raised a family and settled on a farm in Gettysburg that had served as a stop on the Underground Railroad and later as a Confederate battle hospital. It is near Eisenhower’s home and the cemetery where Lincoln spoke.

Americans may read about tyranny, but only those who lived it know how it feels—and how it feels to tear it down. I lost my bronze relic from that day 60 years ago, throwing it away as I threw away so much of my beginnings to become an American.

I was born under tyranny but I found a new birth of freedom in America, a nation that gave me the opportunity to pursue my right to rise in life. May this country and its president continue to offer such hope to those who come after me.

Dr. Boritt, professor emeritus at Gettysburg College, is author of “The Gettysburg Gospel” and “Lincoln and the Economics of the American Dream.” His son, Jake Boritt, a filmmaker, helped him with this article.