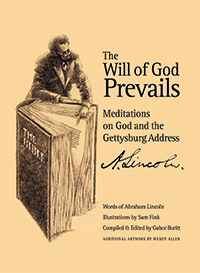 Much of Dr. Gabor S. Boritt’s life has been dedicated to the study of a singularly meditative man – 16th U.S. president, Abraham Lincoln. “Abraham Lincoln is important to me,” Boritt has said.

Throughout his years of writing and thinking about Lincoln, Boritt has published volumes exploring Lincoln’s leadership, both politically and militarily, his influences and how he has influenced others, and his speech at Gettysburg. This is in addition to works examining Gettysburg, the underpinnings of the Civil War, and issues relating to the Confederacy.

Many of these volumes have been academic in nature, but Boritt’s latest offering on the enigmatic president is purely meditative in nature.

“The Will of God Prevails,” released this fall, touches on God and the Gettysburg Address through Lincoln’s own words.

According to Boritt, the book was born in the 1980s.

“I woke up, and I knew what I wanted to do,” said Boritt in a recent interview.

That morning, he took two of his sons to school, and the other to a neighbor’s house. As he recalls, his wife, Elizabeth, was out of town. He then settled in for a morning of work on his Civil War era farm outside of Gettysburg. A fresh snow covered the ground, making the surroundings perfect for mulling Lincoln.

In hours, Boritt had compiled 16 meditations, mostly quotes taken from Lincoln’s letters and speeches while in office.

Putting aside the writing, intending to get back to it eventually, Boritt continued with his teaching duties. He taught for almost three decades at Gettysburg College until retirement in 2009.

Years later, Boritt returned to the collection and decided to prepare it to share with others.

It is his first new book in more than seven years, and is significant as a milestone for Boritt.

After dealing with a stroke that initially made it difficult to write, Boritt was determined to make a return to putting pen to paper.

“This is the first time I was able to write a little book,” he explained.

It didn’t take him long to pick up where he left off.

After he was secure with the text, he knew he wanted to set off Lincoln’s meditations with visual art from folks just as passionate about the 16th president as himself.

Enter Wendy Allen and Sam Fink, whose work is showcased in the slim volume.

According to Boritt, he and Fink became close friends after Fink’s work was showcased via the Civil War Institute at Gettysburg College. “The Will of God Prevails” showcases several pieces by Fink, who passed away in 2011, courtesy of both the Boritt family collection and Gettysburg College Special Collections. They were photographed for publication by local photographer Bert Danielson. Other works by Fink are provided courtesy of his publisher.

Wendy Allen’s work is also showcased in the volume. Allen, who has a gallery in Gettysburg, is known for her body of work focusing on Lincoln and his countenance, and his symbolism for the American community. She and Boritt are also friends thanks to the Civil War Institute, which Boritt led for more than two decades.

For Boritt, “The Will of God Prevails” is clearly a labor of love, representing collaboration between friends and family, and Boritt’s continuing intellectual relationship with one of the United States’ most studied presidents.

“I hope this little book may work,” he concluded.

“The Will of God Prevails” is currently available online - www.GettysburgStory.com/will   and at Gallery 30 in Gettysburg. More information on the book and how to purchase it is available at [email protected] .